To begin gathering information about traditional Mānoa and the history of the University of Hawaiʻi at Mānoa, we considered a range of different resources. At the start of our research, we looked at maps of Mānoa valley dating back to the late 1800s to see the divisions of land that are on which the university sits.
We then moved on from existing publications after gathering leads to primary sources in the University Archives and found useful documentation of the history of languages and cultures on campus by researching a number of archival collections (see below for more details). After many trips to the archives we began to create a large timeline of significant events in Mānoa history in regards to language and culture and from there we came up with proposals for utilizing this research to change the linguistic landscape of the UH Mānoa campus by making it more multilingual and multicultural through signage and other semiotic aspects. After designing proposals for multilayered maps of Mānoa, signs for different divisions of land, suggestions for commissioning campus art, and proposed changes to the UHM website, we presented our ideas and to many scholars. These scholars included knowledgeable historians of UHM, the library archivists and Hawaiian collection librarians, many Native Hawaiian scholars, as well as the Office of Planning and Sustainability. We did not limit ourselves to only conversing with scholars but also included focus groups with students who currently attend UH Mānoa because they, too, are stakeholders for this research.

This research process began with the existing publications about the history of the University of Hawaiʻi at Mānoa in order to build a timeline of significant events beginning from pre-university Mānoa and extending to the present-day. There are a few key publications that were especially helpful in getting our research started: 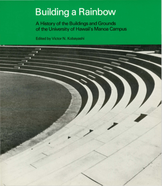 Building a Rainbow
​A helpful guide with specific dates for major buildings on campus and the history of who buildings are named after as well as references to useful primary resources/archival material. 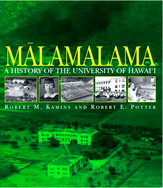 Mālamalama
Historical text about the university and the land beneath the university in regards to land ownership and land transfer after the Great Mahele (division of land for ownership) in Hawaiʻi.
​ 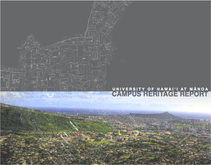 UH Mānoa Campus Heritage Report
A thorough report on UHM history beginning with reports of the Hawaiian chiefs who were in Mānoa valley before the inception of the university. 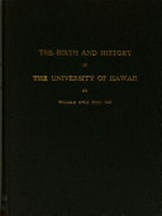 Yap, W.K.F. (1933). The birth and history of the University of Hawaiʻi. Shanghai: Kwang Hsueh Publishing [with Chinese translation]

A crucial part of this research stemmed from the survey maps of Mānoa valley to better understand the traditional Hawaiian names of the land that lie beneath the University of Hawaiʻi at Mānoa. In order to do this we searched through the Hawaii Land Survey Division Maps to find any maps of Mānoa that were drawn during the 1800s and 1900s. The most useful map is the 1882 survey map of Mānoa valley that includes the names of the ʻili ʻāina, or smaller portions of land in Mānoa valley. Below is a gallery of the land survey maps that we collected:

The University Archives (located in Hamilton Library on the UHM campus) proved to be a useful resource during this research. At first it was difficult to determine what archival collections to look through to find more information about linguistic and cultural history on campus. As we read more through the publications about UH Mānoa we found numerous references to certain materials such as Ka Palapala (UHM Yearbook), UHM Board of Regents Minutes, Wist Hall Boxes, Ka Leo o Hawaiʻi (School Newspaper). Each of these sources added valuable content to this project:

Board of Regents Minutes

The Ka Leo o Hawaiʻi Newspaper proved to be invaluable for researching movements on campus throughout the history of the university. We searched through the years of Ka Leo looking specifically for movements, protests, and events that dealt with culture or language. This newspaper also provided images of the events that took place on and off campus. We gathered events dealing with language and culture and added them to our working timeline of the multicultural and multilingual history of UH Mānoa. Here are some examples of events that we collected from Ka Leo:

Our proposals are also informed by interviews with many different scholars and stakeholders at UH Mānoa. All of these scholars helped us to shape our research in a way that is meaningful and well-informed by considering multiple viewpoints and opinions. The scholars we have interviewed thus far are as follows: