During focus groups students expressed that they wanted to see more permanent campus art. At UH Mānoa many talented student artists create murals and paint them on top of the temporary walls around construction sites on campus. Many times these works of art are of Hawaiian subject matter and some are even depictions of ʻōlelo noʻeau or wise sayings in Hawaiian. We propose that permanent campus art be commissioned on the UHM campus, especially art that depicts Hawaiian subject matter and moʻolelo or stories. 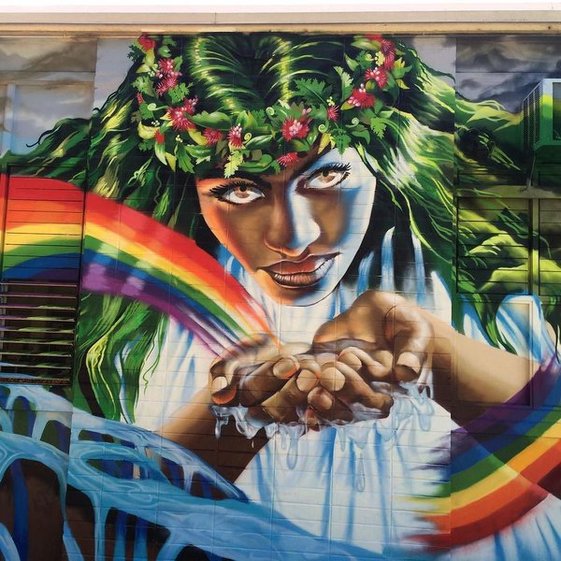 ​One of the most popular Hawaiian moʻolelo that took place in Mānoa is the story of the beautiful Kahalaopuna. Kahalaopuna had quite a tragic life, however, this moʻolelo contains significant people to Mānoa history. Kahalaopuna's mother was named Kuahine, which is now the name of the misty rain in Mānoa. Her father was Kahaukani, which is the name of the wind that blows through Mānoa valley. Kahalaopuna herself is the product of the wind and the rain and became the rainbows that appear in Mānoa. This is just one of many stories that have the potential to be depicted through the artistic work of the students at UHM. Recently, Kaimuki High School finished a mural project depicting Kahalaopuna (see picture on the left) and their project serves as a great example of what we propose.

Kahalaopuna has also been depicted through art in the Welina Mānoa Project. Welina Mānoa is a project that was done by many scholars at UH Mānoa to create elementary school curriculum for students based on Mānoa and the resources within the area. One of the main goals was to use Native Hawaiian knowledge about science and the ocean to teach students about sustainability. We can also propose that full stories be depicted as the Welina Mānoa project did in the above picture.
Click Here to See the Next Proposal →